T/7i is, without reservation, one of the most-balanced RELs of all time. In order to achieve perfect balance, a sub must weigh speed against heft, while ensuring true extension-depth-and do so in a physically harmonious package. T/7i manages to make it all seem easy. Quick and delicate for a perfect blend, it can pound out exceptionally deep, tuneful bass that belies its size and plays louder than most will ever require.

When we upgraded our drivers, we were forced to redesign outward. The lovely cabinets grew over its predecessor due to thicker cabinet walls and improved bracing. Why? Because the additional speed and impact of the new drivers requires greater control or the benefits can be lost before they get to the listener.

The new composite alloy/fibre engine in T/7i blends precisely the correct dimension of stiffening alloy with a fibre material chosen for its sonic neutrality and light weight. The combination is brilliant; exceeding the performance of competitors’ drivers that are many times more expensive. The forward-firing 8” active couples with a larger 10” down-firing passive, again with carefully chosen balances of alloy to fibre and the result is seamless, effortlessly deep bass that blends perfectly with the main speakers.

The Power Behind REL

If our driver designers deliver the structure of REL’s sound, the electronics are the brains and the power behind our success. Serie T/i uses the same Class A/B power amplifier sections with large, high current power supplies, precision-wound toroidal transformers and an amazing reliability record that has powered almost 100,000 RELs. Our proprietary filter designs are responsible for rave reviews for REL’s unique ability to blend seamlessly while layering on all the harmonic structure missing from conventional systems. Standby Mode switch not included on 110V units.

Arrow™ is REL’s latest generation of zero compression wireless. Super-fast delivery of both High Level Bass and .1/ LFE ensures the rich, natural warmth that only RELs can deliver. With a throw distance of some 45’(13.7M) Arrow permits flexible placement without sacrificing sound quality.

“Not only is is chalked full of great sound quality. I mean, if you’re someone who’s fanatical about your bass and you want a subwoofer that can effortlessly keep up with the most complex bass passages this guy can do it with ease. But not only that, it’s just easy to work with.”   Read More +

A special round of applause is due this mini-sub for music lovers. The T/7i is even faster and tighter than its forbear, yet remains tonally supple, with well-defined timbres. It’s also remarkably potent for a single, forward-firing 8" driver augmented by a quick-reacting, downward-firing 10" passive radiator (and a smooth 200W Class AB amp). The sumptuous high-gloss lacquered enclosure with aluminum accents has inputs for high-level Neutrik Speakon (cable included), plus low-level RCA and LFE. A little classic. Read More +

Having owned quite a few different subwoofers in av decided to try a pair of rel T7is with my Buchardt S400s. I installed them high level in stereo to my Hegel H190 amplifier I also had shorter custom made high level cables made. After collaboration on each sub I sat back to listen, what can I say fabulous both subs disappearing integrating seamlessly I have since first setting them up moved them in to different positions just to experiment I've found tweaking can be fun I'll probably leave them where they are for now. Just a tip make sure you buy two. 😊. 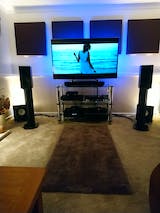 I am pairing my T/7i with the KEF LS50 passive mini monitors. The T/7i has a very high build quality and a pretty appearance that I bet will last for years.

It is important to note that since the LS50 speakers do not really have a woofer, but just a tweeter inside of a 5.25" midrange driver, there is somewhat of a frequency gap between where the midrange of the LS50 rolls off and where the upper bass of the T/7i rolls off. As a result, I have the crossover on the T/7i turned pretty high, about 3/4 of the way (so between 90-100 Hz) to fill in the gap between the midrange frequencies of the LS50 and the sub-bass of the T/7i. I also have digitally equalized the lowest sub-bass frequencies, 25-40 HZ, down about 9-12 dB because those frequencies of the T/7i were too boomy for my small 10' x 15' room.

There is a good amount of tweaking to be done in order to get the T/7i integrated in with the LS50. I think a pair of speakers with more bass, like the KEF R3, would be easier to integrate with the T/7i. There is no way I would ever run the LS50 without a subwoofer like the T/7i, though.

For a comparison, I turned off the T/7i while playing music and listened to the LS50 by themselves, then turned the T/7i back on, and it really felt like the LS50 became more muscular and authoritative speakers. Play around it with it enough, and the T/7i can make the LS50 punch lower and fuller as if they had woofers. Just watch out for those boomy sub-bass frequencies, the passive 10" down-firing radiator on this thing is no joke.

Excellent sub pair. The sonic integration is seamless, it feels like it simply extends the frequency response of my S400’s, not calling attention to itself. My previous sub from a well regarded subwoofer online brand would add the bass but not in such an articulate and well integrated way. These REL’s got it. It’s quite magical once setup is accomplished. Setup is not super hard by requires attention. I’ve also customized the high input cable using Canare speaker cable in a shorter length. The rest of the system is all balanced with a Schiit DAC, SS Pre and NC400 monos from Hypex. 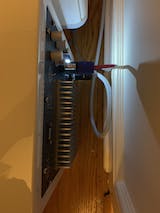 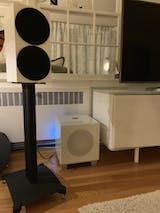 I received good support from REL concerning which product to buy and post installation purchase.

"Even without the high-level connection in use (wilfully ignoring REL's manual that declares 'you will almost always' hookup this way), this is a seriously accomplished device. And even if you choose, as an LFE purist, not to run a simultaneous input for movie playback, you should certainly experiment with the high-level connection for conventional two-channel audio. I found it improved the sub's integration with my L/R speakers and sense of speed." Read More +

"As REL woofer-in-chief John Hunter described to me, the new T lineup benefitted from the development of the Series S line. The Series S reminded him not only of the importance of both a lighter/stiffer driver but of the issue of self-quieting, which Hunter describes as design and engineering 'intended to produce a cone/driver that starts and stops well and immediately quiets down and does not continue ringing.' Basically, no overshoot." Read More +

What I really enjoy about these smaller, less expensive subs, is that there has been no compromise in the T7is in terms of what makes the big RELs truly great. The cabinets, though slightly simpler in design, are still executed to the same level of fit and finish as the top models. Ditto for the drivers and electronics. Hence, the T7i is more than worthy of one of our Exceptional Value Awards for 2018. Read More +