Tzero is, in many ways, the most difficult design we have ever executed because never before have we delivered so much for so little. 5 coats of lacquer, as in all Serie T/i, next generation Class D amplifiers, High level inputs, .1 separate input stages, rugged 6.5” main driver with exceptional output and low bass extension for its size means Tzero gives up little to much larger units from the competitors. Tzero is a miracle in miniature.

So Much, In So Little

Tzero is built using a super stiff cabinet construction that drives the resonant frequency higher so it is more easily damped by our instrument-grade bracing. We utilized 5 full coats of lacquer, and solid aluminium feet and badging because REL owners understand quality must extend throughout a product, not just in the most obvious locations. And its diminutive scale allows it to all-but-hide among the furnishings in your home.

Bass Beyond Its Size

At REL every clean sheet design begins by defining and designing the best bass engine for a given application. While the long throw 6.5” is our smallest-to-date, but make no mistake it is powerful and articulate, able to fill medium-sized rooms effortlessly. Have a much larger space? Distribute them throughout for an unobtrusive spacious presentation of music and film sound. Though Tzero is REL’s entry level, that doesn’t mean it can’t punch far above its weight class. 100W high current watts from a NextGen Class D amp means it holds its head high and is capable of delivering many years of satisfying performance. Includes a full REL connectivity suite, fast 8ms delay filter set and our famed High Level Input as well as a .1/LFE input.

One of the last subwoofers we looked at was the REL T-Zero. In fact, we looked at two of them. This year, the company subtly changed the T-Zero. So subtly you’d hardly notice at first glance. So subtly in fact that I didn’t notice the difference at first and got really stroppy about the magazine […] Read More +

This REL subwoofer made a huge difference in rounding out low frequencies, complementing new Focal bookshelf speakers I just acquired for my 2-channel system. The set-up was remarkably easy with the tutorial videos. Just enough bass extension to fill up a small study room. Still fine-tuning the crossover but am pretty happy with this little marvel!

As always, REL subs are easy to integrate to one's system. I have an old Britannia B1 that is still going strong in my theater rig. I set up the T zero as part of my office computer audio. It fills in the lower frequencies very well. My only gripe is that one of the feet on the unit that I got was shorter than the rest, causing it to "rock". I just stuck an adhesive felt pad under it & it's good to go. I wish it would have been perfect out of the box. The black & yellow wires in the speakon plug were also not connected for some reason but that was an easy fix. Planning to buy one of the bigger models in the near future & hopefully that one is going to be perfect.

P
P.M.
Nothing but the best

If you want the best sub for music, look no further!!

Absolutely love the REL subwoofers and the Tzero is an exceptional product! Wish I had gotten two at that sale price but I wasn't certain that it would work well in a mid size room, BUT IT DOES! Now if REL would be so kind to run that sale again I would be happy to purchase again!

I bought two of these units, a black unit for my main kit and a white one to replace a "boomy" Polk sub I had in my office. As they are identical units, I will review them here, but will distinguish there performance based upon the differing equipment and room size/location of the set-up.

The Black Tzero presently resides in my 'man cave' with fairly solid audiophile grade components including a Rotel RA-1592, Mcintosh Tuner, NAD CD and Rega Planar 6 turntable. The speakers are passive KEF LS 50's that power a 12 x 12 room to excellent sound. However, given the neutral tone of the Rotel, I heard the limits of the bass within the LS50's and felt they needed a small boost. After listening to the REL 5 (an excellent unit), I chose the REL Tzero because I felt that this little guy would provide enough extra without overwhelming the rich mid-bass/tone of the LS-50's; also, if I was underwhelmed, I could always add a 2nd Tzero and augment the deeper tone. Well, the REL has proven to be more than adequate in this 144 sq. foot room and is exactly what i thought it would it would be to my music.

However, one small negative note: I attached the Tzero via the included High Level Input cable (attaching the red, yellow and black lines to the "B" speaker terminals) and when the Rotel RA-1592 is shut off, it hums audably requiring me to turn the REL off via the man power switch in the rear. REL recommended an alternative set-up so I purchased 6 foot monster cables and attached them to the hi/low and the subwoofer output on the Rotel and the humming remained, less audible but still extent. I am dealing with the annoyance but I have to say that the daily power switching may cause early deterioration of the power main on the REL. I am trying to determine whether there is yet a better solution.

In reference to my office kit, it is a much simpler design that being a Harmon/Kardon HK 3770, with a Cambridge Audio CD and U-Turn Orbit Custom table. In this configuration, I used the direct sub-woofer output to the HK and this has proven to be a quieter det-up with no hum. The passive KEF Q 150's work well with the Tzero and again, as others have stated, this sub woofer is a 5 star wonder. The fact that I bought the white one on a special summer deal of $249.00 is tremendous.

In summary, the hum is worth dealing with given the quality and augmentation of the sound. (the little guy sounds deeper than 35htz, but maybe my old ears can't discern a difference anymore). Recommended for small and medium sized-rooms up to 200 sq. feet.

"This is The Little Sub That Could. The REL T-Zero V2 isn’t meant to be compared to the big guns, but in a way the small-cones make them extremely fast, and that is a perfect foil for high performance audio systems.” Read More + 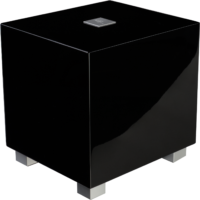